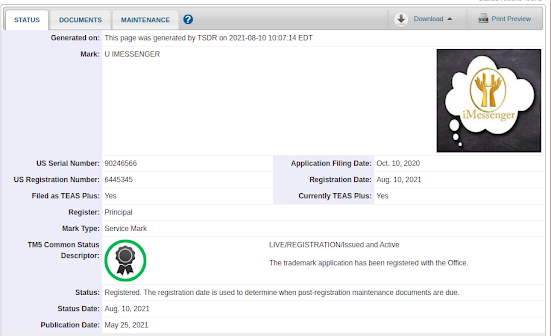 Finally, it happened.
Our trademark for IMESSENGER got approved.
According to what we believe, unlike the first examiner, our current examiner looked at the facts, and clearly stated that there is no prior confusingly similar mark available.

If that were the case, why did the first examiner made the decision right away that our mark can't be registered, which resulted in us digressing our efforts, time, money, and health for more than three years of our time? Can that decision be justified?
Here is one example of what could happen with such situations. Let us say that we had championed a project/product through a RPO headquartered in the same location as one of the major players in this marketplace. Let us say that we had this RPO project in the running in 2016, and then this happened. While we were taking efforts to address this issue, and also address other organizational immediate needs, the other powerful organization with resources could channel their energy and efforts to develop a product on this front. To add twist to this story, it could become even more convoluted when this large organization could be the platform provider, where this entire issue happened.

Why did the platform provider repeatedly removed our application from the platform, while another application with similar name and focus that was build on a same third-party development kit was kept on the same platform all these years, though that application got added more than two years after ours?
Why did a third-party, which did not even offer an application on this platform claimed likelihood of confusion without supporting evidences, that resulted in our application being removed without our knowledge, permission or prior to us presenting our side of things?
Can this case be presented in the International Court of Justice to get fair consideration and compensation, considering that the involved parties have operations globally, and are bigger than most of the countries in the world?

Let us perform an analysis on these aspects soon.