LETTER TO INTL. COURT OF JUSTICE WITH REGARD TO iMESSENGER TRADEMARK & OTHER EFFORTS OF OUR ORGANIZATION - To be cont'd 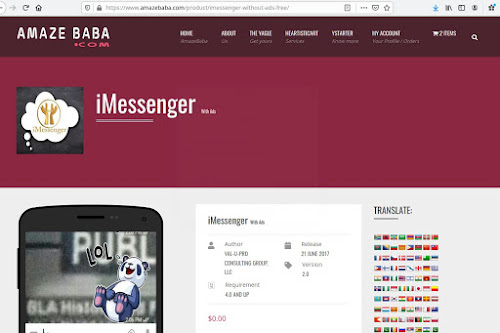 We don't believe that justice would be served in this area, if the companies involved are as big as the GDP of the most of the countries. For that reason, we are seeking the services of the International Court of Justice to address Intellectual Property issues around the globe to bring balance and to counter huge companies that are becoming bigger and bigger, supported by corrupt politicians holding office at the helm, and are further supported by ever expanding, unaccountable financial institutions.
The whole reason for the creation of UN and the entire gamut of governing bodies around the UN was to bring order from the lessons learnt based on the previous two WWs. However, considering the worldly happenings, it is becoming more and more concerning that these governing bodies themselves are making the institutions and organizations that have become powerful to become even more powerful. When this happens, those with resources could easily exploit various avenues to bend the rules to their whims and fancies. For example, a company whose mark, IMESSAGE, is considered descriptive for the reason that IMESSAGE could mean Internet message by one of the country's IPO unit is overturned as an acquired distinct mark in the courts. Whereas, a mark, IMESSENGER, that was approved twice prior as a creative word mark gets categorized as a descriptive mark, which could cause confusion. I guess this whole practice of bringing subjectivity in a legal system that has been in place for centuries now defeats the whole purpose of stare decisis and the refining of the legal system over time. Moreover, even with the advent of technology, which enables to manage better historical accounts and records, it is disheartening to see such questionable practices continuing to persist.
This is not only with the marks; a controlling and powerful platform provider could have arbitrary and questionable practices to sideline apps, users and those who don't align with their plan of action with inconsistent and arbitrary rule systems, along with other hidden actions in this intertwined and interconnected IoT world.
In the same way, financial institutions, which are nothing but middle-(wo)men, who are funded by the central governments with their own ability to print money to their own fancies with not much accountability,  can easily make over-extended bets causing financial crises on a regular basis, with such crisis becoming almost a five-year repetitive plan at somewhere or the other in the world. Such actions, while impacting the livelihood of many households appear to result in magnification of compensation for the senior executives, who are making such bets.  Even more so, when the average career span for common masses coming down, the senior executives at the helm remain there for ever.
What is the significance of such a trivial topic?
It is not a trivial topic any more. When the world's economy at least on paper is controlled by the valuation of social media platform providers, and other such internet related companies, supported by ever-expanding financial institutions and corrupt politicians, we can rest assured that this matter is not trivial any more as this ecosystem account for trillions of dollars in valuation, while impacting livelihood of billions of people.
References:
1. https://ip-talk.com/2019/04/05/imessage-cautionary-tale-of-an-allusive-trademark/?lang=en - France rejects iMessage as a descriptive mark
2. http://trademarkblog.kluweriplaw.com/2017/07/21/imessage-managed-to-acquire-distinctiveness/