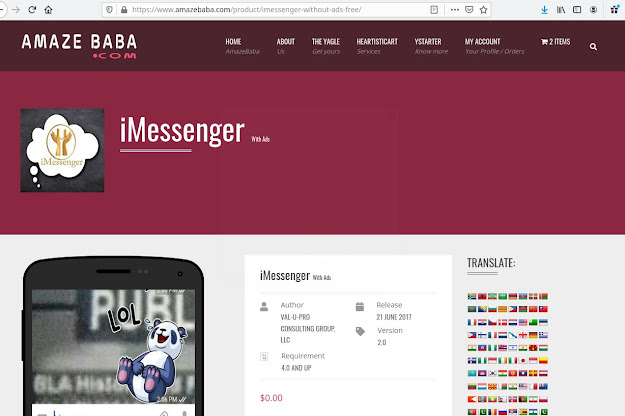 We submitted our office action response on September 2nd as a response to the office action provided by the USPTO legal counsel. It is a coincidence that right after that submission, we got a notification from the Google Play Store that our iMessenger was suspended for the presence of Vungle SDK. The details of this story can be seen over here, https://www.legaldhoom.com/2020/09/vungle-story-saga-continues.html.

More details of this submission could be found over at the USPTO trademark database, which is a publicly available database. Here in this article, we will capture the key elements that we presented to support registration of our mark:

1. We presented the historical account and sequence of events that led us to file our trademark.

2. We provided evidence and chronological order of all the marks related to ours.

3. Key element in this chronological order is that iMESSENGER was the first of the marks in this series of marks pointed out by the USPTO counsel and stare decisis needs to be considered.

4. Moreover, though not live, this mark was a live mark when Instant Messenger, IMESSAGE, IM, IM2 were all approved in similar trademark International Classes with IMESSAGE being the last one.

5. As a response to concerns raised about likelihood of confusion, we produced evidences that the trade channels for the mentioned marks are distinctly different than ours, which is an agreed upon consideration put forth in TMEP. We also highlighted the following points put forth in TMEP.

For this, we presented the following key elements mentioned in the TMEP:

"[T]he question is not whether people will confuse the marks, but rather whether the marks will confuse people into believing that the goods they identify emanate from the same source."

The similarity or dissimilarity of established, likely-to-continue trade channels.

The conditions under which and buyers to whom sales are made, i.e., "impulse" vs. careful, sophisticated purchasing (see TMEP §1207.01(d)(vii)).

We outlined the point that our mark and the way it is presented in third-party marketplace platforms would not cause confusion to the existing marks. In addition, the goods being offered reaches to a tech savvy audience, who have the option to read through all the details prior to the purchase and can easily remove the application, if it were to be an issue.

6. Moreover, our mark has been in use for now more than 3 years, and there is not even an instance when a purchaser confused our mark. On the contrary, there is another IMESSENGER added almost two years later in the Google Play Store, which has drawn attention from potential purchasers of our good that has been documented and shared in the office action.

8. We also offered counter arguments with regard to I and Messenger being considered descriptive marks. We cited the point of all the marks that have been approved revolving around these combinations in the same international classes as ours. For that matter, there were two different IM2's live at the same time.

9. Moreover, around the same time or later compared to when our mark was filed, there were two other marks filed namely UMessenger and IM, which were both approved. Going by the argument put forth by the legal counsel, IM could be considered as Instant Message and UMessenger as User Messenger, and this did not prevent these marks from getting approved that too within a year or so.

There were other arguments put forth as well. But, these were the key ones presented to support our mark, and believe that our presentation would receive careful review at least this time around.