Why did we file this trademark application in the first place?

In this global stage where intellectual property practices might favor those with resources and also not bounded by the same rule of law across the world, we had our own reservations to file any trademark to save time, efforts, resources and money. But, our IMESSENGER application that provides avenue to chat and call with a decent set of features was randomly removed from the Google Play Store one fine day under the pretext that another entity had claimed likelihood of confusion of our product with theirs. The entity in question was Apple.

Though there are other products with the same name, IMESSENGER added later on the Play Store which still exists, and many more variants of the same name and IMESSAGE being there in the marketplace (please see below in the "SUPPORTING DOCUMENTS" section), it made us wonder why only our product was taken out of the Play Store. For that matter, there are so many variants of Messenger based trademarks listed in the USPTO database. This question led us to research further in the TESS database offered by USPTO to determine whether we could file our trademark. Fortunately, we noticed the following:

1. There was no live IMESSENGER trademark registered.
2. There was also precedence for acceptance of the mark, IMESSENGER, not once but twice by USPTO in the years 2000 and 007.
3. Moreover, these were the first set of trademarks approved in the Messenger space.

We immediately took action and filed our trademark application, while also presented the same facts to the Google Play Store team to reinstate our app in the Playstore.

This action of ours helped us to get our application reinstated in the Google Play Store, though we still believe that it should not have been removed in the first place, just based on another party's claim and without even hearing our point of view in this matter.

What is shared here? 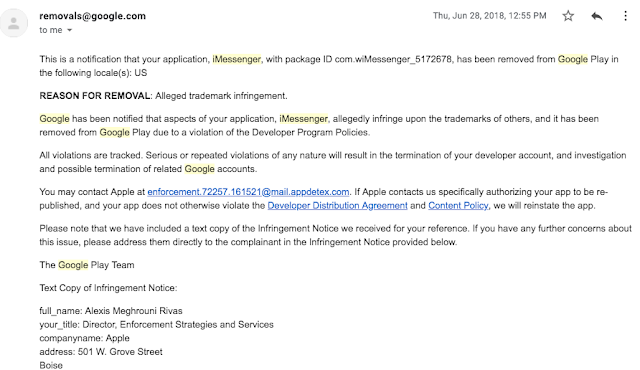 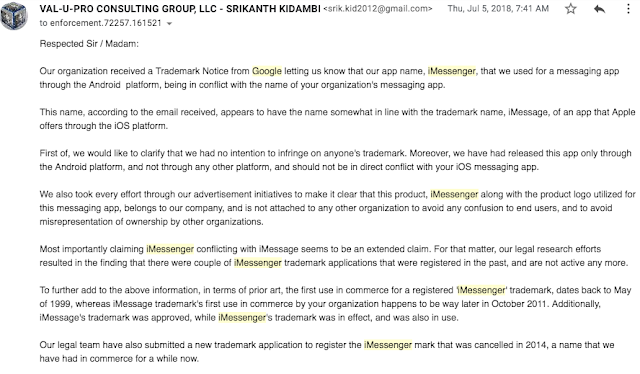 What happened next in this real story?

We will also be putting together a series of questionnaires in this regard to create more awareness on trademarks and also to get your opinion in this matter based on your understanding from the details provided.

All the information pertaining to Intellectual Property cases are publicly available to anyone. For that matter, whenever we received any response from the USPTO, we immediately heard from sizable number of "legal firms or third-party platform providers" offering services in line with our application, while we were just getting ready to look through the details of the Office action received from USPTO.

Exhibit 1:
Our email to the Google removals team sent after our own experience requesting to remove another app with the same name and their response.

What is shared here? 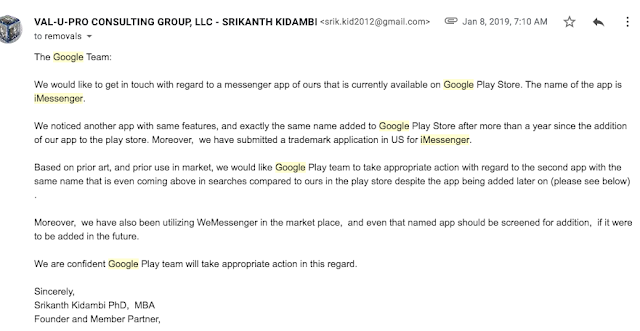 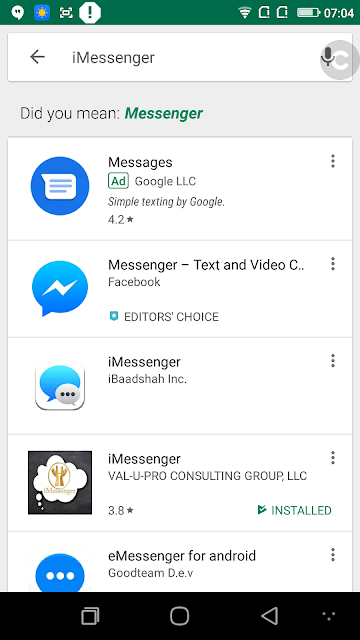